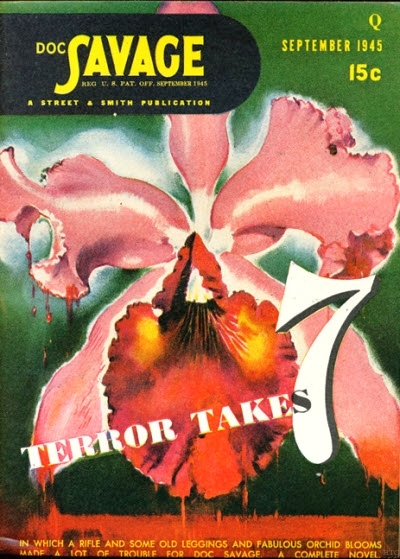 For a while post-war Doc Savage was retitled Doc Savage Science Detective. We’re not there yet, but by and large, Doc comes off as a regular pulp gumshoe in this month’s trio. TERROR TAKES 7 is a fairly straight mystery, enlivened by Lester Dent’s flair for writing a memorable hook. A woman named Paula Argus […]

BARRY HERE: I don’t agree with everything that’s said in this essay but it’s definitely worth a read. I’m a longtime lover of sword & sorcery and Robert E. Howard’s contributions but this is an interesting take on the genre and Howard’s place in it.

While I don’t quite buy John Campbell’s Hero With a Thousand Faces theory, I do think that there are certain basic frameworks that stories can (but never must) follow, and which can yield a nigh-infinite variety of different permutations of the same basic ideas whilst leaving room for the author’s own themes and personality to […]

This is an excellent look at one of my all-time favorite movies – and it’s the perfect time of year to revisit it!

The original Swamp Thing is still among the best of this amazing character’s many interpretations.

One of the strengths of the Doc Savage series is its flexibility to move from SF to lost race yarn to pulp crimefighting. Consider this month’s trio, for instance. THE PHARAOH’S GHOST is an “exotic” adventure set in Egypt. Johnny’s been abducted so the book opens with Doc, Monk, Ham and Long Tom capturing a stereotypically […]

via The many flavors of Doc Savage: Pharaoh’s Ghost, The Man Who Was Scared, the Shape of Terror — Fraser Sherman’s Blog

a topsy-turvy life of quietude

The collective writings and thoughts of that guy in the site title.