Powers
*Water Control 6 – Extras: Blast, Energy Drain (Riptide can draw the moisture from an enemy, dehydrating and possibly killing them), Water Travel (Riptide can generate tidal waves that she can ride over great heights and distances).

Riptide got her powers during an undersea accident that would have killed her if not for the mysterious Sea Witch. The truth of her getting powers was a story, which had been carefully written by her father Storybook Smith many years earlier. Her father left before she was born, but she grew up with the story of her famous father and his book – The Book of All Tales, which had been stolen.

When Leanna got her powers, she joined Youngblood. Originally she did it to make some quick money, but soon became an integral part of the team.

When Riptide agreed to pose nude in Pussycat Magazine, she was apparently fired from Youngblood, but after Crypt had destroyed part of Youngblood and Battlestone became leader, she was asked to join again.

During a Youngblood barbecue at the Langston household, Riptide found her father’s missing book on Langston’s shelves an took it. When Langston realized who had taken the book, he went to Riptide’s room, while she was out walking, to take it back. Unfortunately Leanna came back early and surprised him. In the following fight, Langston killed her in cold blood, and tried to frame Knightsabre for the murder. Langston’s plans were revealed by Toby King, who found the book, and Langston was put in the Hell of Mirrors in Supreme’s Citadel.

Unlike many of Youngblood’s members, Leanna seemed to be a fairly unique character and I hated to see her get killed off. 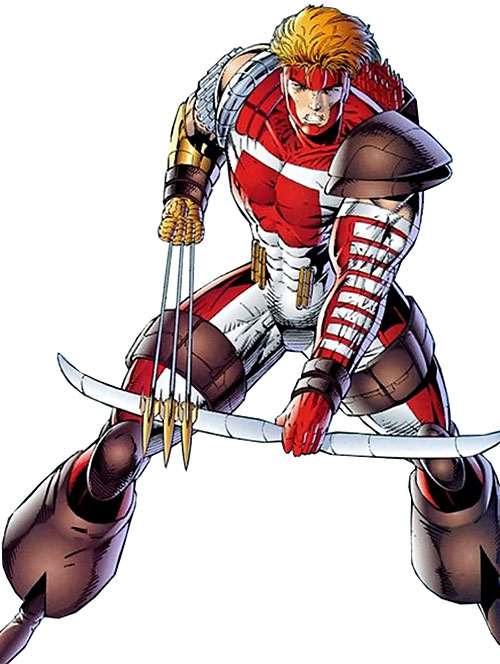 Powers
*Bow – Shaft’s bow has no string – it uses a small gravity well device instead.
*Arrows – Shaft uses a number of different types of arrows. This is a listing of some of his more commonly used ones: Explosive Arrows 7; Concussion Arrows 6; Tear Gas Arrows (causes choking and severe eye irritation, a type of Stunning effect); Smoke Arrows (blankets an area, creating limited visibility for a -2 penalty to sight-based actions); Hunting Arrows 4
*Target Acquisition Rig adds +2 bonus to ranged attacks
*Belt Pellets – Shaft frequently carries pellets that have a range of effects, such as: Knockout Gas (Stunning effect); Flash Grenades – Dazzle 4; Fragmentation Grenades 6
*Jet Boots – Flight 5 (Limit: Burnout)
*Gadgets (can be applied to either arrows or pellets) 5

Jeff Terrell was an elite FBI operative prior to his selection as leader of the Youngblood domestic team. Chosen primarily because of his strong leadership abilities and his movie star good looks, Jeff was the logical choice to replace the more intensely driven Battlestone. At this point, Battlestone had been forcibly removed from his position as team leader.

The swift transformation into the public persona known as “Shaft” ensued, giving him instant media exposure and firmly establishing him as a hero to the American public.

A classic action hero with a strong temper. Shaft has a commanding personality and keen mind allowing him to quickly size up any situation and make whatever decisions are necessary. His personal charisma and resolution inspire trust and loyalty within the team.

Interestingly, despite the fame and fortune resulting from the media onslaught around Youngblood, Jeff resents the media attention. He despises the costumed artifice associated with the Youngblood program.

Thomas John McCall was an average under-achieving 16-year-old teenager. When he swallowed a vial of top secret genetic material in his father’s lab, a startling transformation occurred and McCall’s body became a mass of granite-like organic rock. He is 8’0″ tall and weighs 1800 lbs. He possess super strength and a near invulnerable rock carapace. But inside this mountain-like hero is a gentle soul with a heart of gold. Badrock has a lot of power at his fingertips, but still is mentally immature. Later, Thomas assumed the identity of Badrock when he was recruited to join the high-profile government superteam, Youngblood. He is the super agent who gets paid big bucks and still answers to his parents.

Badrock is proficient with a number of weapons including the many guns and knives available to him in the Youngblood arsenal. Not one to hide behind gadgetry, Badrock often uses the incredible power of his fists to pummel opponents into submission.

Badrock is impulsive, having picked dangerous, property-damaging fights with the Savage Dragon and Mighty Man.

He also once visited Hell, confronting Spawn’s old enemy the Violator. This was after being named temporary security head of a scientific installation that was investigating the realm of hell. He was more responsible at this point, trying to protect the many innocent people who had unwittingly made the trip to Hell with him. He had to deal with the interference of heavenly and hellish agents and the unwillingness of some of the humans to actually obey his orders.

When Youngblood was discontinued after the death of Riptide, Badrock took some time off. It did not last long though and through a series of events, he became part of the fourth incarnation of Brigade.

In the year 3000, Badrock was still alive and returned for a brief period of time to get some help from Youngblood to stop the Katellans. The continued presence of the Katellans to get Combat back led to the destruction of Earth, Katella and Acura in Badrock’s timeline. Badrock had therefore returned to 1995 to prevent this from happening. The mission succeeded. What happened to Badrock after this is unknown.