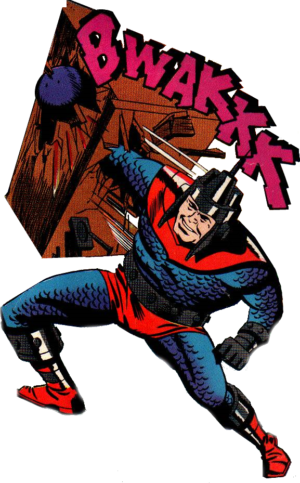 Qualities
*He has an iron fist
*Likes to break things

Iron Fist has a hand made of iron and the ability to fly. He fought the Web. That’s it, really.

The Flipper is a circus performer with contempt for the Web and his abilities. The Flipper uses his superior athletic abilities to commit crimes.

Look, it’s pretty obvious how lame this character is but if your group has someone well-known for their acrobatic abilities (a Nightwing or Daredevil type, for instance), maybe the Flipper could make for an interesting challenge for them. Obviously if you’re considering using Flipper against higher-powered heroes, you better give him a team of villains to work with.

The first two Webs are basically the same person, with slight differences. As father and son, you can use the same stats for each. The whole notion that some of the stories featuring the Web are ones that feature John Raymond Junior is a retcon to explain the character’s lack of aging and that’s led to a few problems. Supposedly the first Web was forensic medical examiner and the second was a criminologist… only you then have a Blue Ribbon story in the Eighties in which the second Web is an assistant medical examiner! So let’s just assume that both were criminologist medical examiners. Like father, like son!

Here’s the origin for the original Web: As a child, Raymond strived his best to do what was right, including attending school to study criminology and learn about the criminal mind, like that of his criminal brother, Tim. When his brother broke out of jail and attempted to rob John’s house, his plans were thwarted by a “Web” he himself created. By cutting the phone lines to John’s house, he worried local police who were trying to reach John. They entered his house and arrested Tim. Ever since, professor John Raymond, forensic medical doctor and famed mystery writer, has donned his Web costume as he wages psychological warfare against his enemies and ensnares criminals in the name of the law.

The second Web: The Web was really noted criminologist John Raymond, Jr. whose father was the original Web. He has continued the family tradition without letting the world know his father retired. The Web’s identity is known by his wife, who objects to his crime-fighting, to the point he has become the “Henpecked hero”. Unbeknownst to the Web, his wife is the superhero Pow-Girl. The two have teamed up on several occasions. He has also had several adventures with his brother-in-law the Jaguar.

The Web is an Olympic level athlete with a vastly superior intellect. He spent his life training as a top-level criminologist, concentrating on what makes the criminal mind operate. His psychological prowess aids him in outsmarting his opponents and bringing them to justice!

The current Web (Wyatt Raymond) is the son of the Web and Pow-Girl.

John Raymond became The Web because his brother was a criminal, which left John with a lifelong obsession with crime, inspiring him to become a criminologist, mystery writer, and ultimately a vigilante. He met Rose Wayne while teaching a University course on criminology, and married her when he eventually retired. When a criminal pretended to be him, he came out of retirement, initially infuriating his wife, until she rediscovered her taste for adventure and decided to become the superheroine “Pow Girl,” joining him in fighting crime. In time the two retired to raise a family.

Young Wyatt Raymond grew up very different from his adventurous parents. An academically gifted but unpopular book-worm, Wyatt grew up trying to avoid confrontations, mapping out the safest routes to travel around school and his neighborhood to avoid bullies. Shy and socially awkward, Wyatt found himself more content staring through a microscope than interacting with his peers. Wyatt didn’t know the truth of his parents’ double lives, but knew he was somehow special – he possessed a strange sixth sense allowing him to see connections between different people and things, like strands of a web. In game-play terms, it allows him to sense danger, even when none is apparent. It is unknown how he gained this “Strand Sense,” given that both his parents possessed no superpowers.

When the Brain Emperor attacked a reunion of the original Mighty Crusaders, Wyatt’s parents were apparently killed, but he was saved by his father’s old teammate The Shield, as were the five other teenagers that had been at the party. From this old hero Alex learned the truth about his parents, and learned that they had hoped he would take up the mantle of The Web if anything ever happened to them. Wyatt received a high-tech “super suit” based on The Shield’s, which would amplify the wearer’s physical attributes ten-fold, effectively allowing him to replicate the Olympic-level athletic skill of his parents. Becoming the new Web, Wyatt joined the New Crusaders.