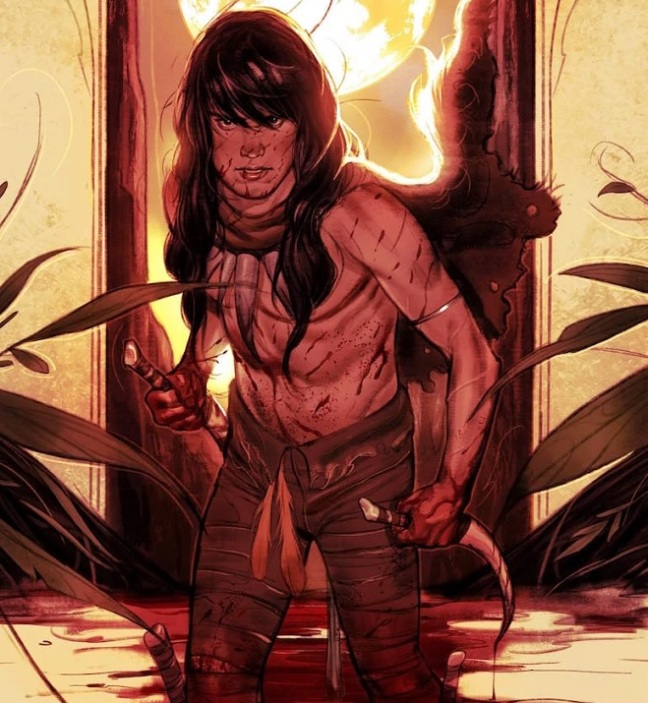 Background
Much of this comes Valiant Fandom:

Savage, real name Kevin “KJ” Sauvage, Jr., is a warrior who battles dinosaurs. His parents are celebrity soccer player Kevin Sauvage and supermodel Veronica Sauvage. After a plane crash, they were stranded on a mysterious island populated entirely by dinosaurs when KJ was an infant.

Being a toddler at the time of the plane crash, Kevin wasn’t old enough to remember his father’s death, which was caused as he searched for supplies for his unwell wife. Kevin grew up being taught how to survive by his mother Veronica, who often told her son that one day they would leave the island and go home. Things took a turn for the worse however when his mother was killed by the leader of a group of men living on the island, leaving the young boy alone.

For an unspecific amount of time, though not a long one, Kevin perfected his hunting skills and ability to kill, becoming an enemy to those who lived on the island. Eventually he decided to try escaping through the portal that the island inhabitants use to get new supplies, killing them all and their leader. Taking the dead body of the leader with him, Kevin went through he portal and found himself in a city.

Due to the harsh conditions of the island he was raised on and the things he had to do to survive, Kevin is very brutal and bloodthirsty, often seen enjoying the killing. After the death of his mother, Kevin has grown obsessed with finally leaving the island forever and going “home”, as his mother promised they would, despite not truly knowing what to expect.

If Savage reminds you a little bit of another Valiant ‘dinosaur hunter,’ you aren’t far off. Since they no longer have Turok, we now get Savage – who is an interesting character in his own right. Keep in mind that he was only fifteen years old at the time of the first Savage series — so those stats you see above? They’re only going to get better.