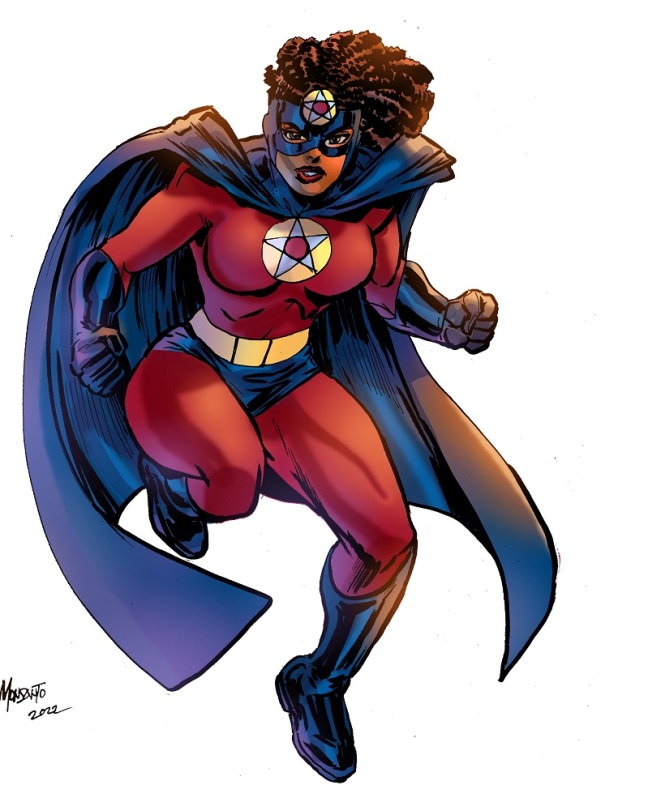 Qualities
Legacy Hero
There’s not much I can’t solve by hitting things.
It’s time for someone to remind America of what makes it great… might as well be me.

Background: Once upon a time, there had been a man named Archie Masters. A shy, timid astronomy professor, Archie had mistakenly believed that he had discovered the existence of a new planet, one located near Uranus. Excited to share his news with a colleague, Archie had mistakenly wandered into the middle of an atom smasher experiment. His close proximity to the atom smasher had unexpected results, rewriting Archie’s DNA. He became the most powerful being of his era, able to fly, smash tanks with his bare hands, and bounce bullets off his pectorals. As the American Crusader, he fought first on the homefront and then in Europe. From 1941-1943, he became a household name… and then, as quickly as he had burst onto the public consciousness, he was gone.

Archie had vanished in ‘43 and popped up next in 2021… on Jada Grant’s couch, no less. The twenty-three year-old college student had wandered out from her bathroom, wrapped up in a towel, and found a wizened old white man on her couch, his shrunken form wrapped up in what she considered one ugly-ass costume. She had screamed, punched him twice right in the face, and then screamed again when she realized that she had just broken her hand.

Archie hadn’t taken any offense to the attack. He had reached out to her with one trembling hand, opened his mouth in a toothless grin, and said the words that she’d never forget, “Jada Grant… You have been chosen. Eat of my flesh and gain my powers.”

Jada had not been made any calmer by his request that she ‘eat of his flesh.’ Though he’d never told her exactly how he’d been transported through time, Archie did reveal that he knew somehow that she was going to be his successor… and he further explained that she didn’t need to eat all of him… just a small part. After much prompting and convincing, she followed his instructions on how to prepare a small section of his flesh after he had used his own incredible strength to remove it. Immediately upon ingesting it, she had been altered, gaining the same powers that Archie had used as a hero. Now, the crotchety old man serves as her mentor as she protects her hometown and the world from threats of all types. She knows that he believes that whatever dispatched him through time might return and she hopes that he shares the details with her before it arrives.

She is currently dating Samuel Hain, the human host of the Straw-Man. Jada is sassy, bold, and confident — and she’s increasingly proud of being the American Crusader, weird costume design choices and all.