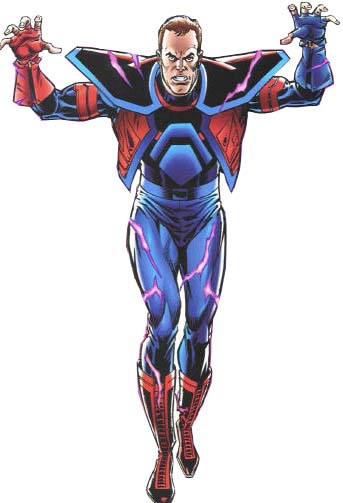 Powers
*Cosmic Awareness 10 (Limit: Only detects threats that are related to BOTH the DC and Marvel universes simultaneously)
*Detect 10 (Limit: Only functions to help him locate people displaced from their native universe)
*Dimensional Travel 10 (Limit: Only allows him to travel back and forth between the Marvel and DC universes)
*Teleportation 7
*Time Travel 9

Qualities
*“Wait a minute – I know you!” Whenever Access appears, memory of who he is and memory of the other universe suddenly returns to the hero meeting him. Normally, the denizens of the Marvel and DC Universes don’t recall the existence of The Brothers, Access, etc.
*An average guy
*People trust him

Nobody knew until 1996 that the Marvel and DC Universes are connected. “The Brothers”, two massive all-encompassing cosmic entities, respectively comprise the whole of each universe. They are inextricably linked.

The person least aware of this was Axel Asher, itinerant student and drifter. He was a native of the Marvel continuum, Earth-616 . When The Brothers suddenly became aware of each other, having forgotten each other’s existence for untold eons, they began a battle. This caused the two universes to slowly merge into one.

Which activated the latent powers possessed by Axel. Mr. Asher was a “shard” – a living embodiment of a fraction of both Brothers’ powers.

Through the actions of a great many super-heroes from both universes (most notably Batman, Captain America, The Spectre, and the Living Tribunal), the Brothers were made to settle their differences. Thus, the balance between the dimensions was restored.

Axel now acts as a guardian of that balance. He monitors contact and travel between them in order to prevent another merger that might have disastrous consequences.

Axel is a terribly earnest and sincere fellow, with a good sense of right and wrong. Although he didn’t ask for his powers and responsibilities, he’s doing his level best to live up to them. And while he’s not really charismatic per se, he does seem to be awfully good at talking people into doing things for him.