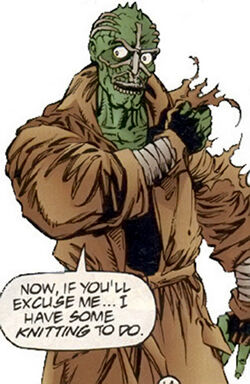 Powers
*Immortality 7
*Life Support 10
*Precognition 5 (Allows him to have visions of the impending demise of others)
*Postcognition 8 (Allows him to temporarily raise the dead and gain information from them)
*Emotion Control 4 (Generates fear only; eyes glow when this power is used)

Qualities
“My name’s Jonathan, I’m from Vermont, I’m a big fan of Tori Amos, and I’m dead.”
Will risk himself to help young people in danger.
Died before he’d ever truly lived.

Jon Martin was reportedly a serious student. He had his eye on a career in engineering – presumably computer science. When he was about 17, he was hit by the Theta virus, and narrowly saved by the intervention of Dr. Rachel Demming. The random empowerment left him a sort of living zombie, with odd abilities and perceptions.

Martin joined the other Theta survivors who had agreed to help Deming in her work to save other victims of the virus – the Exiles. Ghoul apparently did not participate much to field missions due to his appearance. But his technical skills were useful at Stronghold, Dr. Deming’s base.

When Deming ordered a general assault on the base of her enemy, corrupt businessman Malcolm Kort, Ghoul was among the other Exiles. He and his friend and fellow Exile Tinsel had to be left behind on the op site, and were captured by Kort’s superhuman enforcers.

Ghoul was thrown into the biological wastes disposal system, but narrowly escaped. Tinsel was handed over to the mercenary Bloodbath, and burned his eyes out in self-defense when he attempted to sexually assault her.

Weakened, Tinsel was gunned down by Bloodbath, and Ghoul arrived minutes too late to help her. Enraged, Ghoul killed Bloodbath, then killed his spirit to empower himself. He went on a murder run using Bloodbath’s advanced guns to avenge Tinsel. This ended with Ghoul blowing up the top floor of Kort’s corporate HQ, apparently killing everyone – including himself.

A few hours later, most of the Exiles were killed in an accident.

Ghoul, however, did not die. His body reconstructed itself using vegetal matter near his grave, leaving him forever changed. His return from the grave triggered strong public reactions when it was revealed an ultra had survived death. But Hardcase intervened and calmed the crowd.

Ghoul met with Dr. Deming, who had narrowly survived but confirmed that her involvement with ultrahumans was over. Martin then checked the Exiles’ grave, but could not contact their spirits since it had been too long.

The despondent Ghoul was convinced to join with Contrary and her pupil Pixx, and later ended up joining Ultraforce along them both. He was instrumental in the fight between Atalon and Ultraforce.

He later solved a case of a faked rock star suicide, leading to a plague of copycat suicides, in a solo investigation.

Tough. He’s been dead and is apparently unkillable, and sometimes hints as having “seen things” when he was dead. It is almost impossible to frighten or intimidate him ; however he can feel tension and will get stressed. At the same time, he’s fully aware that he’s a physical wimp, and acts in a careful, almost physically cowardly way when faced with physically powerful foes. Unless angry, of course.

Sarcastic. Ghoul is a undead monster, and compensates by being extremely cynical and sarcastic. He’ll make numerous flippant remarks, most having to do with death, his appearance or the fact he’s disposable. Given his unfazeable streak, he’ll continue making flippant, even slightly insulting remarks in the face of ultra-powerful foes. And he’s really good at gallows humor.

Hurt. Ghoul mays seems scary but funny. However sometimes he reacts with uncharacteristic aggressively, either verbal or physical. These are often tied with the death of others; for instance when someone attempts to commit suicide, when he’s afraid somebody will die, or when a loved one dies. In those cases, he stops being funny and is just scary, taking direct action while he normally stands by the sidelines due to his lack of direct powers. He tends to grow kind of attached to young well-meaning innocents, such as Tinsel or Pixx.

Removed. Ghoul is distant from normal persons, and rarely explain himself. On some level he feels his plight justifies whatever he does, and he’s very aware he’s an outcast. Since he now longer has to care about such things, Ghoul smokes and drinks heavily (through the effects of alcohol on his “organism” are fleeting) and eats complete junk.