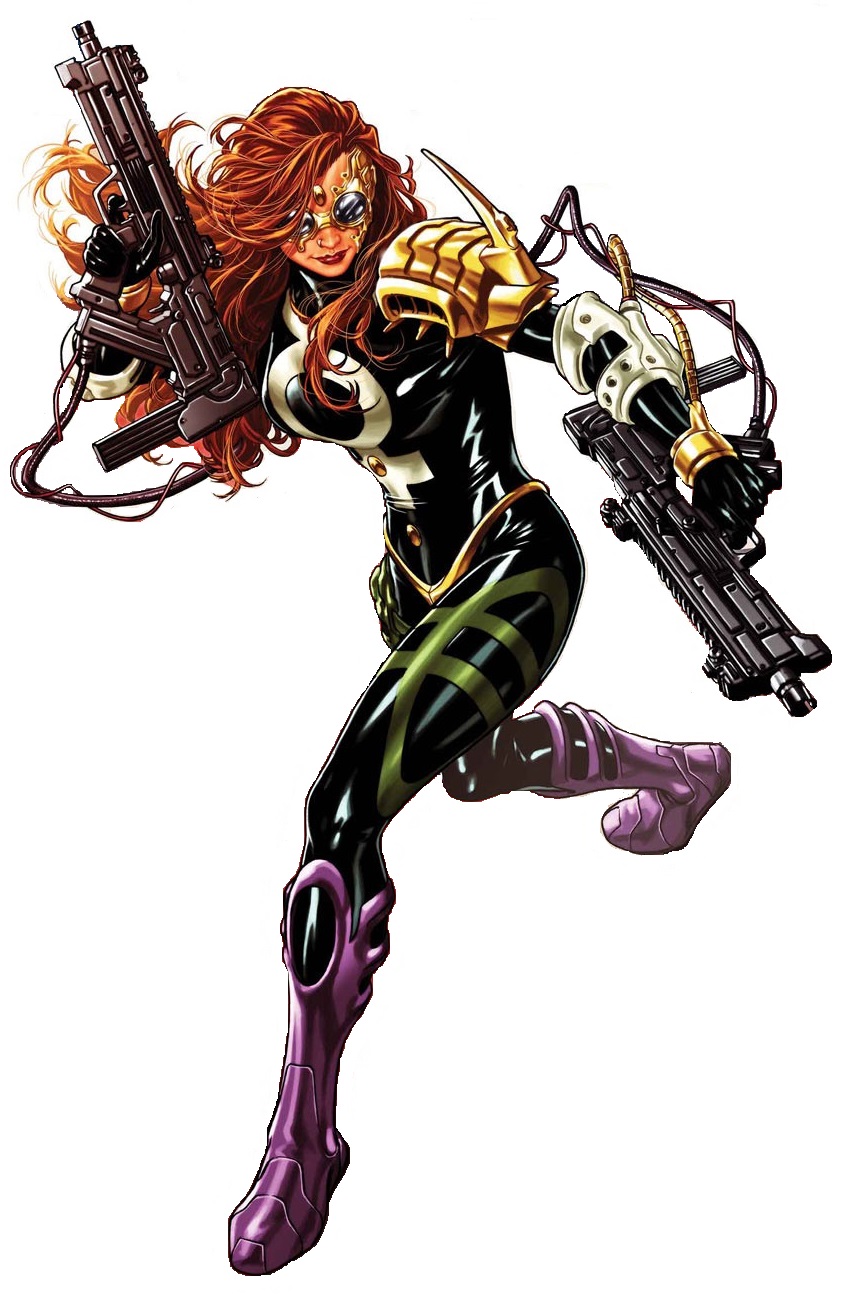 Powers
1. Shevaun’s costume is actually part of the Fabric of the Universe. It is bonded to her on a molecular level and may not be removed, however she is able to store it in a pocket dimension and call it to her when needed. The costume has become a part of her and grants her the following powers:
*Flight 8
*Phasing 7
*Telepathy 7 (Extra: Mental Blast)
*Mystic Blasts 8 (Extra: These bolts ignore body armor but not force fields)
*Force Field 7
*Cosmic Awareness 10
*Dimensional Travel 8 (Extra: Thanks to her experience in doing so, she may access the Realm of Dead Superheroes automatically)
*Time Control – Travel 10 (Limit: Tiring)
*Absorption – Magical Energy 7 (Limit: Energy absorbed in this fashion is actually sent through the void which is her costume and arrives in a sub-dimension contained therein. She tries to avoid doing this too often as it can cause harm to the sentient races that live in the sub-dimension)

2. Armor – Comprised of a number of metallic devices which are attached to the Fabric that she wears, the armor provides no additional defensive bonuses. It does, however, help regulate her power flow and prevents her from accidentally using too much energy. Towards the end of the series, Shevaun dispensed with wearing the armor at all, preferring to trust her own instincts when using her powers. Without the armor, all powers gain the Limit: Burnout.

3. Graviton Phase Blaster – Blast 9, Time Control 8 (Can speed up time for a target or slow it down)

Daughter of Mys-Tech board member Ranulph Haldane, Shevaun found herself orphaned after her father was killed by the demon Mephisto, who had granted Ranulph and the other Mys-Tech board members immortality in exchange for meeting certain quotas with regards to souls sent to Hell. When Ranulph attempted to circumvent this agreement, Mephisto slew the man while Shevaun watched from afar.

As the Chief Researcher for Mys-Tech, and the most accomplished Techno-Wizard on the board, Ranulph made sure that his daughter’s education in the art of Hi-Tech Mysticism was second to none. Though he kept secret from her the details of Mys-Tech’s connections to Shevaun, she felt responsible for the evil her father and his friends committed and swore that she would see Mys-Tech destroyed.

This vow was made possible by the intervention of a being known as Dark Angel, the Angel of Death. This being appeared before Shevaun and donated a fragment of the Fabric of the Universe, which attached itself to her flesh and became her costume. Contact with such a powerful element of the universe opened her mind to new possibilities and granted her enormous cosmic powers. As Hell’s Angel, Shevaun battled the forces of Mys-Tech for many months, gaining tutelage under Prof. Xavier’s X-Men and forming a close friendship with Betsy Braddock. She frequently adventured alongside a Guide from the spirit realm at this time and spent a good deal going to and from the Realm of Dead Superheroes where she sometimes gained aid.

Eventually, Shevaun came to the conclusion that Dark Angel had manipulated her and not told her certain details of her powers intentionally. As a result, she abandoned the name he had given her (Hell’s Angel) and chose Dark Angel instead. Why she’d choose the Angel of Death’s name as her own when she was, in fact, angry at the being is open to debate – the real life explanation, however is a bit easier to understand: Marvel Comics was threatened with a lawsuit from the Hell’s Angels motorcycle organization and they elected to simply rename Shevaun.

Regardless, Shevaun aided several other heroes in defeating Mys-Tech during the so-called Mys-Tech Wars and then proceeded to aid Death’s Head II in repelling the destruction of Earth. She still lives in her father’s castle in Darkmoor, England and continues to protect the Earth from threats both magical and technological.